I’ve been delving a little more into nix lately, though to be honest I’m not entirely sure why. It promises confident reproducibility, but to be honest it’s a total dumpster fire so far. That aside, I’ll carry on…

I have a number of launchd scripts that I use to automate various tasks on my MacOS machines. Unfortunately launchd can be a bit of a pain, as it generally runs in an environment where your PATH may be unset, stdout and stderr are unavailable (unless manually configured), and changes to the scripts require a bit of ceremony to load and unload before they are picked up. Overall, I consider it a good deal more effort than accomplishing similar tasks with systemd (or cron obviously).

That said, with a little effort, one can have MacOS scripts that run on login, automatically in the background, whenever a file or directory changes, on a schedule, etc. As a practical example, over the past several years I’ve used this to schedule downloads or other high bandwidth activity to start overnight, since we’ve been living on very slow rural internet until just recently.

The script that prompted this post uses selenium to perform some scheduled tasks that depend on a web browser. It uses chromedriver and tends to break any time chromedriver upgdates (due to me running homebrew updates), since the new chromedriver binary requires manual intervention to allow its first run (as a MacOS security precaution). I was hoping to make it a little more reliable by running it under nix.

I started off having a surprisingly difficult time figuring out how to run the most basic bash or python scripts as a nix flake, but eventually got that semi-sorted out.

Unfortunately, just when I thought my troubles were over, I found that my nix flake ran perfectly when I manually ran nix run, but failed when invoked by launchd.

Debugging the issue was made easier with a few discoveries:

The launchctl debug command will attach to a terminal, wait for the foo script to be run, and can override the options for stdout and stderr to output them to the screen. A few notes:

One approach to starting the script would be to open a second terminal window or tmux pane and run:

You may not need the bootstrap part if the plist is already loaded. With that done, you should then see the stdout and stderr in the launchctl debug window.

If you don’t want to bother with multiple windows, you can use a background process to start the script (with a small sleep to give you time to type your sudo password, if needed):

Perusing the launchctl manpage, I came across another really handy command: launchctl submit. After a little tinkering, it looks like a way that one can run a one-off command through launchd without needing to write a whole plist.

For example (I recommend you run this in a temporary directory):

This will run bash -c 'echo foo', with the stdout and stderr output to ./out.txt and ./err.txt, respectively. Further, once it’s been submitted, you can see that foo now appears as a valid launchd label:

As far as I can tell you need to set absolute paths for e.g. out.txt, I assume this is because the default working directory is not writable (?).

To make it stop running (it seems to run periodically in the background), you should launchctl remove foo.

Part of my python script finds the most recently downloaded file whose filename follows a specific pattern:

It works fine when run interactively, but when called from launchd, I used the above debugging strategies to discover that my glob was resutling in an empty list (and therefore an IndexError). The discrepancy between interactive and launchd usage made me suspicious that this was a permissions error related to the new-ish MacOS security settings for folders like ~/Downloads and ~/Desktop. Unfortunately, running the script didn’t seem to be prompting me for the usual permissions box. I tried adding /sbin/launchd and /bin/launchctl to Full Disk Access in the Security & Privacy preference pane, but it didn’t help.

Eventually, I discovered that I could could convince MacOS to give me a permissions prompt by having nix interact with one of the directories in question, via launchd.

For example, using the new-style nix commands, one can run the equivalent of bash -c 'echo foo' like so:

Using nix-shell, I think that would look like this:

(Note the differences in quoting – ugh.)

However, adapting this to our current problem doesn’t seem to work, the files are empty:

The problem is that the path to nix isn’t set in this environment. Fixing that minor detail…

… and we are greeted by a familiar prompt: 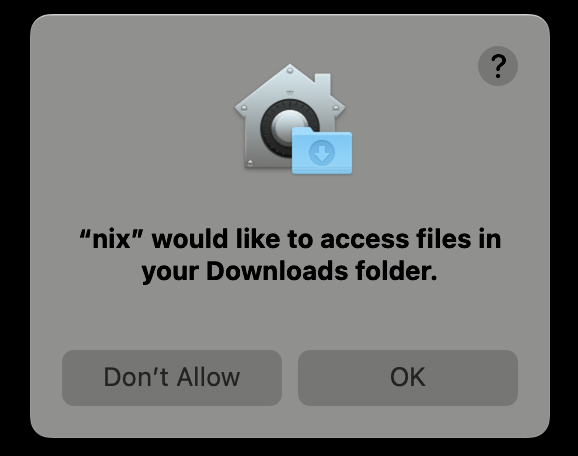 I just wrote a little Makefile (to this toy project: https://github.com/n8henrie/runner-rs) that tries to give a binary launchctl permissions to access Desktop, Documents, and Downloads, thought it might be a helpful template for others:

Running make in this project should build and install the binary, then submit a launchd job that gives the binary access to the projected directories, wait for this access to succeed (you should see 3 prompts), and then cleans up when it exits.