Bottom Line: For headful runs on GitHub Actions, make sure to pass your XAUTHORITY and DISPLAY to tox.

I’ve been wanting to improve the testing for pycookiecheat for ages. It’s a small library that pulls cookies from the Chrome / Chromium Cookies file, primarily for reuse in scripts. For a long time, I just included an example Cookies database in the tests and ran from that. For a while, I just instructed the user running the tests to manually visit a webpage and set a cookie. Not great solutions.

I knew that I eventually wanted to move to something like Selenium, possibly via Docker, and set an actual cookie by actually running Chrome, but it was pretty painful to sort out.

Recently, I’ve started using Microsoft’s newish project Playwright for browser automation, and I’ve been pleased so far. I find it generally easier to use than Selenium, in part because I frequently end up with Selenium-browser version conflicts or incompatibilities or “cannot find GeckoDriver” type errors; Playwright works around this by downloading Microsoft’s own (slightly patched, IIRC) version of the browser in question. While this extra download adds a little bloat and time to the initial setup, it helps guarantee script-browser compatibility, and so far does a much better job making sure my jobs run as expected. (I’ll additionally note that they provide a Docker container that I plan to start using, as that should virtually guarantee that a working job continues to work, at least as long as the web content it runs on remains unchanged.)

With a modest amount of effort, I was eventually able to move pycookiecheat’s tests over to Playwright; the difficulties I ran into were mostly around creating a Chrome profile that would store its password similarly to how it would be stored for a real user, so that I could ensure I was loading it correctly for use in decrypting the cookies. Of note, I was not able to figure out a way to do this on both MacOS and Linux with a headless run; I had to run Chrome headed / headful to get things to work correctly.

Once I had everything working locally, I tried to convert my CI from Travis to GitHub Actions, since I’ve heard so many good things, and I assumed that as both GitHub and Playwright are Microsoft products, they should work together well. Enter months of trial and error.

I run my Python tests via tox, which lets me test on multiple Python versions seamlessly (via pyenv in my case) and hopefully ensure compatibility. It also lets me add targets to lint my project and generate documentation, all in a single command. I know that to simulate a headful run on a headless system (such as CI), that I’d need to use something like Xvfb (X virtual framebuffer) to “fool” the system into allowing the browser’s GUI to open (or at least seem like it did so). Playwright has this clearly documented, so to follow their documentation for my test setup, I used something like:

You can see the full file – in its failing state – here.

Unfortunately, when GitHub Actions tried to run my tests, I repeatedly got Unable to open X display and similar errors: 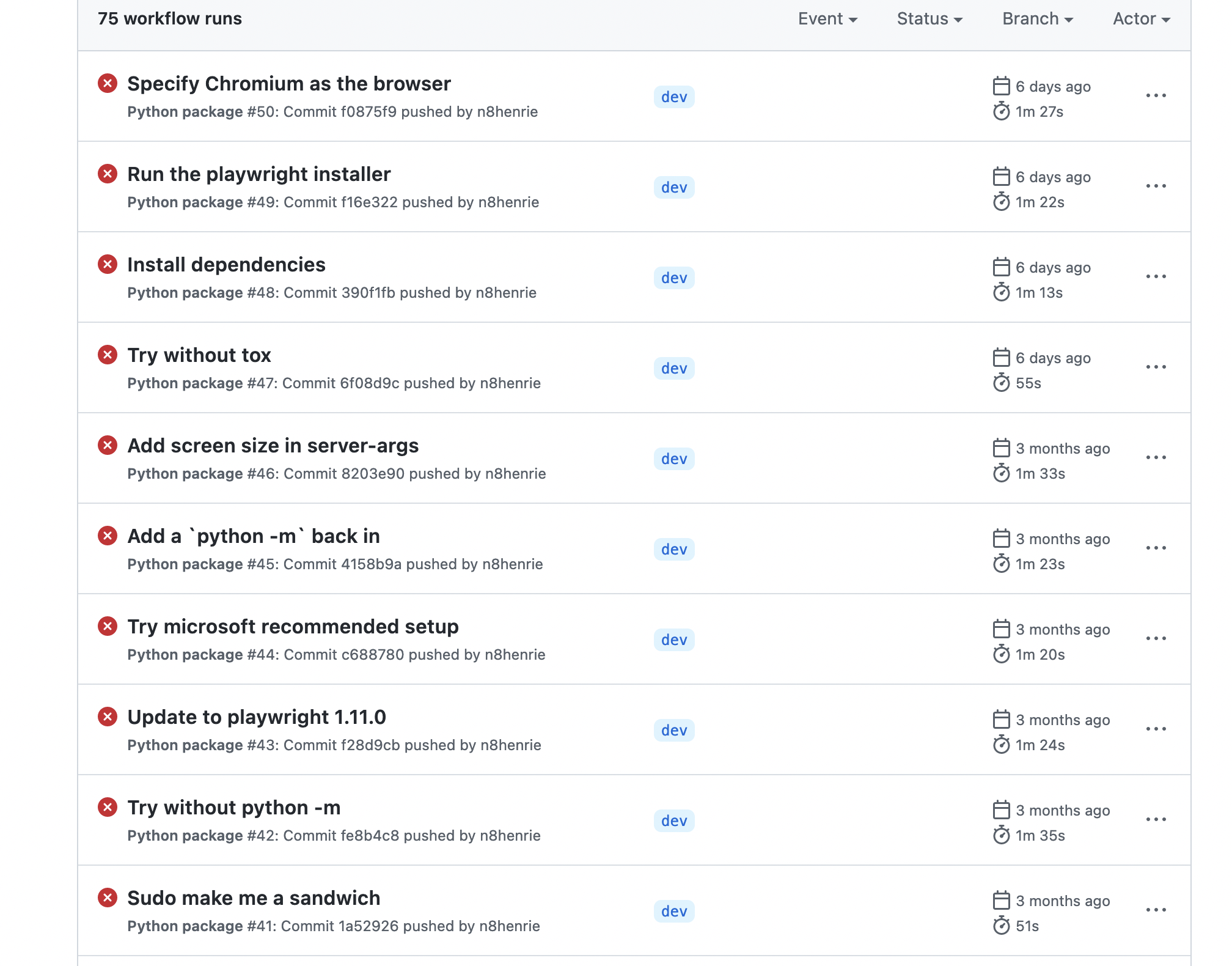 I eventually opened an issue at the Playwright repo, where I’d seen several other issues regarding xvfb and headful runs, and waited patiently.

A few months later, I got a response recommending that I try things I was already doing, which I didn’t find particularly helpful, and my issue was summarily closed. I was admittedly a little snarky in my responses. Thankfully, the maintainer’s response did point me towards tox as being a potential source of trouble, and I eventually had a single run succeed, in which I used pytest directly instead of going through tox. Progress!

However, I really would prefer to just run my tests via tox. This way, the tests running in CI are as close as possible to the tests that I run on my local machine, and I don’t have double the maintenance burden (i.e. if I make changes to the pytest command I run in tox, I don’t want to also make that change in the GitHub Actions yaml files). To help sort out what was going wrong via tox on GitHub Actions, I used a few tools to simulate GitHub Actions locally:

Knowing that I could successfully xvfb-run -- python -m pytest but not xvfb-run -- python -m tox -e py, I figured there was probably some difference in the environment that was causing trouble. If I were smart, I would have changed my commands section of tox.ini to just commands = /usr/bin/env and then compared the output of these four commands:

I probably would have noticed a lot more quickly that two necessary environment variables were being cleaned from the environment in which tox runs the tests: XAUTHORITY and DISPLAY.

The tox documentation on this is very clear: https://tox.readthedocs.io/en/latest/config.html#conf-passenv

If a specified environment variable doesn’t exist in the tox invocation environment it is ignored.

There are two ways to tell tox that you’d like it to leave these specific environment variables alone (and pass them on to the tests):

On MacOS, I didn’t seem to need any modification of tox’s default handling of these variables, so I decided to leave my tox.ini alone, and use the env: key in my GitHub Actions configuration, which seems to be doing the trick.