Bottom Line: A brief look at pip and a few sweet python3 modules.

This post started out as an email to a close buddy of mine, but I realized it would also make a pretty good post with a few small tweaks. He has a computer science background and is thinking about giving Python a shot (with my persistent nagging). I’ve already emailed him about my recommended way of installing Python (homebrew, since he’s on OSX), and my recommended version of Python (python3).

The best way to install modules is with pip, which will be symlinked from pip3 if you’re using a python3 installation from homebrew. You used to have to install it separately (brew install python3-pip or sudo apt-get python3-pip or sudo pacman -S python-pip (since Arch uses python3 as default)), but it should now be pre-installed as of 3.4 or later.

Once you have it, you can pip search and it will search PyPI (the python package index?), then you can pip install whatever package you’re interested in (e.g. pip install requests). You can also pip uninstall, which is a big advantage over easy_install or several other Python package installation solutions — it keeps track of your installed packages. For that same reason, you can also pip list --outdated to see what packages have available updates, then pip install -U a specific package to update. Don’t forget that you’ll probably need to replace pip with pip3 in all of these examples, assuming you installed from homebrew.

To avoid breaking things, it’s probably better to upgrade individually, but you can also do a little bash scripting to batch upgrade all outdated packages. For example

ack is pretty great (brew install ack), but grep would also work. Here I’m just using it to filter out error messages from the pip output and only grab the lines that should reflect an upgradeable package. The cut strips out just the package name, and the rest upgrades the packages while always returning True (because otherwise xargs will stop the entire process if one of the packages has an error.

So, with that behind, here are a handful of my favorite packages, including links, and even a little code snippet for several showing why they’re so awesome. (Sorry to the devs if I get your capitalization wrong.)

Makes accessing / form submitting / downloading a webpage as simple as possible, even if the page involves POST and cookies and authentication and all sorts of mumbo jumbo.

Provides access to the OSX Keychain, so you can keep your secure / encrypted passwords out of your scripts. Especially handy if you’re sharing the code with others — you don’t have to worry about editing out your passwords.

I have a hard time describing it, but it’s fundamental to my workflow. iPython provides an excellent IDE with code completion, history, autoindentation, access to the shell, logging your work (at any point %logstart ~/Desktop/my_script.py and your hard work will be preserved). The iPython Notebook is entirely different, but even more exciting — provides the in-browser IDE that you can work on piece by piece, running each segment of your script to get it right, displaying images and plots inline… just unreal. Then you can export your entire masterpiece as html and share it in a way that anyone can not only read like any other website, but if they also have iPython (and you provide a link to the notebook) they can also execute and tweak the code you used to make it. I probably read the thoughts of a hundred people trying to explain why they thought it was so awesome before I finally gave it a shot… and it to me it really every bit as amazing as they tried to convey.

Pandas (including its implementations of matplotlib, numpy, etc.)

Code-based spreadsheeting on steroids. Imports excel, csv, and html based tables in a flash. Transform then, do some basic stats, and make some plots in no time. Highly recommended to use with iPython Notebook. For example, even at my amateurish level, in under 15 minutes I was able to figure out how to import my entire Mint transaction history (conveniently downloadable as a .csv) and plot my spending history at a given establishment over time for the last several years. 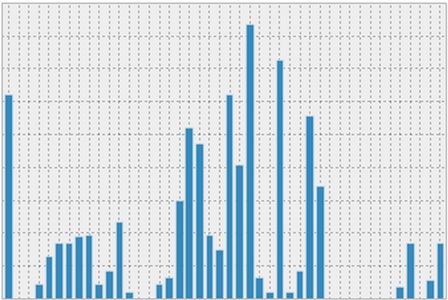 The basis of my icsConverterWebapp stuff. Lets me import / manipulate / export iCalendar files (the file format, not talking about Apple iCal).

Manipulate audio file metadata. Really nice for batch file renaming when you have 300 files from some podcast that are all named file_1.mp3 file_2.mp3… and yet in iTunes you can see that they have descriptive titles embedded in the file somewhere…

Libraries that I want to learn to use at some point