Bottom Line: A brief dicussion of median vs mean and look at SSA data on the US median wage.

NB: There may be (hopefully minor) edits that are out of sync between the blog post and the downloaded notebook.

I often hear that the average US citizen has an income of around $50,000 per year. I hadn’t previously seen where this number comes from, but recently I found that the Social Security Administration provides some pretty interesting data at their website.

For example, here is the US average wage index over time (displaying a local copy below):

I recently discovered that they provide a webapp showing a summary of the US W-2 reported income. Most interestingly, it includes binned data so one can look at the changes in specific income brackets over time, and additionally they provide an estimate of the median income as well.

An example URL for the webapp: https://www.ssa.gov/cgi-bin/netcomp.cgi?year=2003

Something I hadn’t considered (for whatever reason) is that discussion on the state of economic affairs based solely on the average income likely misrepresents how most of the US is doing. The median income is probably more representative of what most of us have in mind.

As an example, if we have a population of 100 individuals whose income is normally distributed from 0 to 10 (choose whatever units you like), the mean and median tend to be similar: 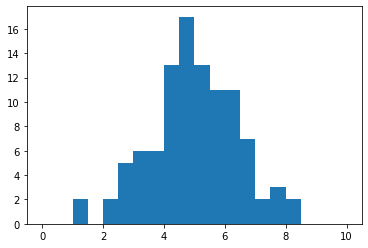 However, if we take just one member of the population and make their income an extreme outlier, the average is improved, but the median is not (assuming the outlier was selected from above the median to start with).

We see that the average income of the population has nearly doubled!

While that sounds great, the truth of the matter is that most of this population has not actually improved at all.

As a matter of fact, we could even have a situation where all but one lucky individual see a decrease in their income, but the average still goes up.

In this example, 99% of the population is 5% poorer than they were to start with, which is reflected by the dropping median income, but contrasts starkly with a near doubling of the average income of the population.

Hopefully this is old news to most readers, but I think it was worth briefly reviewing. Statistics matter! Especially when some people in our contry are worth hundreds of billions of dollars, while the official poverty rate is more than 10% – some 33 million people.

Before going on to the SSA data, I wanted to point out that the SSA data below differs substantially from the data available from the US Census (and for fellow nerds, my understanding is that census.gov has a good API – I look forward to exploring their data soon!). For example, their report shows the 2019 median household income to be about $68,000 – much higher than the SSA numbers below.

It seems like some of the important differences to keep in mind include:

With that out of the way, on to the numbers!

The chart above shows the parameters for the regression, but they’re a little hard to read. The most pertinent seems like it would be the slope – the number of people per year that are moving into the >= $50,000,000 per year range. Lets build a little convenience function to make the slope easily accessible.

Now lets look at the poorest of the poor.

The number of Americans making more than $50 million per year is low, and is increasing by about 6% per year (small denominator, this is less than 8 people). Each of them make as much per year as about 42,000 people in the lowest bracket combined. The count of people in the lowest bracket is decreasing by less than 2% per year. Hopefully this represents improvement in their standard of living, though I suppose it could also be people dropping out of the workforce completely.