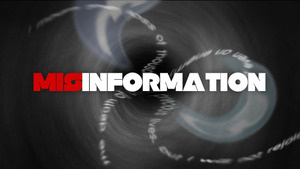 Even if you've never embarrassed yourself by unknowingly spreading an urban legend as fact to friends and family or, say, retweeting a fake quote by Martin Luther King, Jr after Osama bin Laden's death, you've at least been on the receiving end of one of these misinformed messages. Next time an email, tweet, or link seems a little fishy, here's how to spot it before your itchy trigger finger sends it to all your friends or followers. (Send this one to your forward- or retweet-happy family and friends.)

A little timely backstory: Osama bin Laden's death resulted in millions of bin Laden-related tweets every hour on Twitter. Thousands of those related tweets included a nice quote attributed to Martin Luther King, Jr that, unfortunately, had never been uttered by King. The story of how an innocent Facebook update turned into a widespread fake quotation is an interesting read, but more importantly, for those of us who prefer to avoid internet egg on our faces: How do you identify and avoid spreading misinformation, myths, and urban legends on the internet?

The first step is the hardest: You've got to employ a healthy level of skepticism for what you're reading, watching, or otherwise consuming—on the internet or elsewhere. You've heard it before, but if it sounds too good to be true, it probably is. For example, the fake MLK, Jr tweet read like this:

"I mourn the loss of thousands of precious lives, but I will not rejoice in the death of one, not even an enemy." — Martin Luther King, Jr

As The Atlantic writer Megan McArdle points out:

...it's a bit too a propos. What "thousands" would King have been talking about? In which enemy's death was he supposed to be rejoicing?

The fake quote was particularly easy to accept because it's a nice sentiment, and it's relatively harmless. Your BS meter is likely twitching considerably more when an email's subject reads: "You've been selected for a free iPad!" But both should send up some red flags to the skeptical ‘netizen.

You should also consider the source. If it's coming from someone you know and trust, then you can employ some sort of sliding scale to whether or not you'll trust it implicitly or undergo some sort of verification on your own part. Even if you trust your boyfriend, however, you may also want to consider whether he really knows anything about MLK, Jr.

At this point, you've decided whether you trust an item or not. If you don't, you're ready for the next step: mythbustin'.

Step Two: Do Your Research

This is the fun step, in which you get to turn to the internet to search for answers! "Search the very source of the lies to discover if something is a lie?" you say. "Ludicrous!"

Again, it's about finding sources you trust (you wouldn't burn all your books because you read one piece of propaganda), and using available tools in clever ways. You can certainly search sources other than the internet if you really want, but you won't find many that index such a vast pool of the world's information and can also search it in milliseconds. Remember, you're just trying to decide whether to forward an email or share a link here, not researching a dissertation. So, where to go?

Snopes is "the definitive Internet reference source for urban legends, folklore, myths, rumors, and misinformation"—and for the most part, it actually does live up to that goal. Snopes has been around since 1995, and if you've ever attempted to debunk an internet myth or urban legend, you've certainly seen Snopes before. The problem with Snopes, particularly in an instance like the much-tweeted misquote, is that it's not so good with the real-time misinformation. It is exceptional, however, for anything that's even a few days old, thanks to its active forums. Keep in mind, as Lifehacker reader Joel Rollins noted, "Snopes is an internet source to be evaluated like any other source. That being said....it stops a lot more stupidity than it starts." Which is to say, Snopes is generally a good, trustworthy source, but don't throw away your skepticism just because Snopes said so. If you were already dubious, though, it may be enough to tip the scales.

Snopes isn't the only site of its ilk on the internet. Sites like BreakTheChain.org, TruthOrFiction.com, and others have similar myth debunking goals.

Searching Google (or, you know, other search engines) 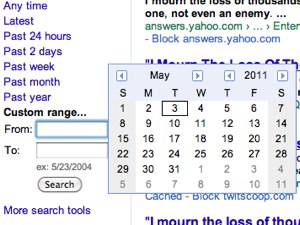 In the case of the mis-attributed quote in our example, PC World's Robert Strohmeyer offers a simple solution courtesy of Google: He used Google's date range filter to see if the quote has ever appeared anywhere on the internet prior to bin Laden's death.

There are a couple of ways to use the date-range filter on Google, and the easiest is to first run your search, then click the Custom range... link in the left sidebar, next to your search results. This will pop up a date-picker menu that you can set to any range you like. You can fill in both the From and To dates, or just use one or the other.

With a few easily weeded-out exceptions (attributed to sites who'd used back-dated timestamps), the results were clear: The quote didn't appear to exist before this weekend.

You aren't limited to date-range searches in Google. Often searching for a few keywords related to the topic in question will yield quick debunking results. Sometimes typing a few words along with "scam" is enough to find what you're looking for. Unfortunately Google doesn't always have the answer, though, and sometimes its results have been spammed with enough fake content that it's extremely difficult to find a result you trust.

Former Lifehacker copy editor Dustin Luck even put together his own custom Debunkadunk search tool that scours the best myth debunking sites he's found on the internet—sort of a super-charged Snopes search.

Between a trusted option like Snopes, some strong Google skills, and a little critical thinking in analyzing what you find, you should be able to weed out whether most items you're skeptical of are fact or fiction.

Now that you've sussed out the veracity of your questionable piece of info, this is the really easy part. If it's fake, don't send it on—unless you're sending it on as a friendly "avoid this" PSA. Easy enough, right?

Congratulations, you've employed due diligence before sharing something that wasn't true! It always feels good when you've narrowly avoided being duped, but your friends and family may not have been so lucky this time around. Rather than scold, gloat, or otherwise embarrass them further for their mistake, absolve them! Take it as an opportunity to (gently) introduce them to the ways of Snopes, offer some simple scam search suggestions, and encourage a healthy dose of skepticism. (And do it without condescension, if you can manage it. Remember, most of us have been duped before.)

Share your close calls, embarrassing myth spreading, and preferred mythbusting methodology (whether we mentioned it above or not) in the comments.